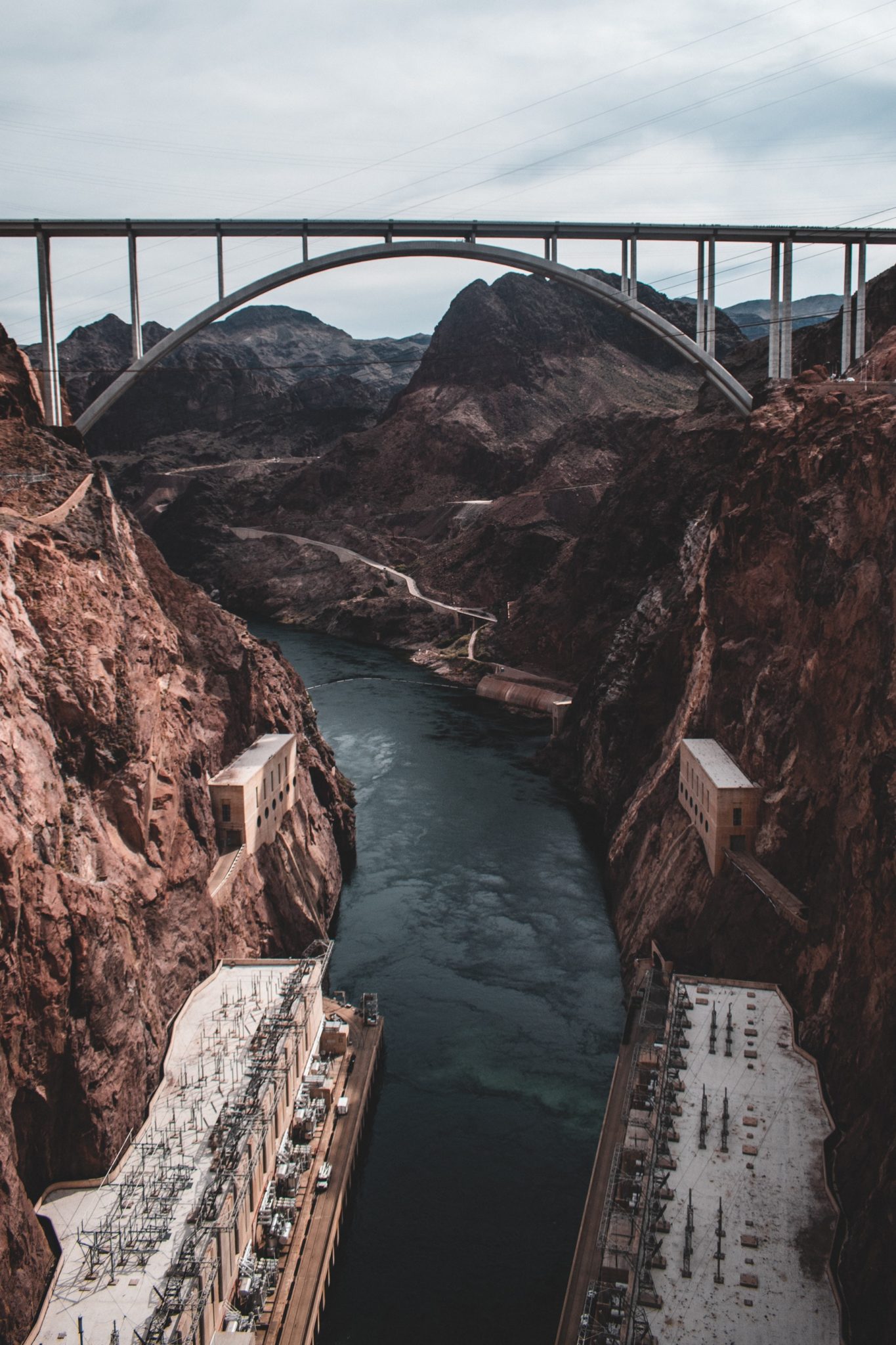 Hoover Dam is a concrete arch-gravity dam in the Black Canyon of the Colorado River, on the border between the U.S. states of Nevada and Arizona. It was constructed between 1931 and 1936 during the Great Depression and was dedicated on September 30, 1935, by President Franklin D. Roosevelt. Its construction was the result of a massive effort involving thousands of workers, and cost over one hundred lives. Originally known as Boulder Dam from 1933, it was officially renamed Hoover Dam for President Herbert Hoover by a joint resolution of Congress in 1947.

Since about 1900, the Black Canyon and nearby Boulder Canyon had been investigated for their potential to support a dam that would control floods, provide irrigation water and produce hydroelectric power. In 1928, Congress authorized the project. The winning bid to build the dam was submitted by a consortium called Six Companies, Inc., which began construction of the dam in early 1931. Such a large concrete structure had never been built before, and some of the techniques were unproven. The torrid summer weather and lack of facilities near the site also presented difficulties. Nevertheless, Six Companies turned the dam over to the federal government on March 1, 1936, more than two years ahead of schedule.

Hoover Dam impounds Lake Mead, the largest reservoir in the United States by volume (when it is full). The dam is located near Boulder City, Nevada, a municipality originally constructed for workers on the construction project, about 30 mi (48 km) southeast of Las Vegas, Nevada. The dam’s generators provide power for public and private utilities in Nevada, Arizona, and California. Hoover Dam is a major tourist attraction; nearly a million people tour the dam each year. The heavily traveled U.S. Route 93 (US 93) ran along the dam’s crest until October 2010, when the Hoover Dam Bypass opened. 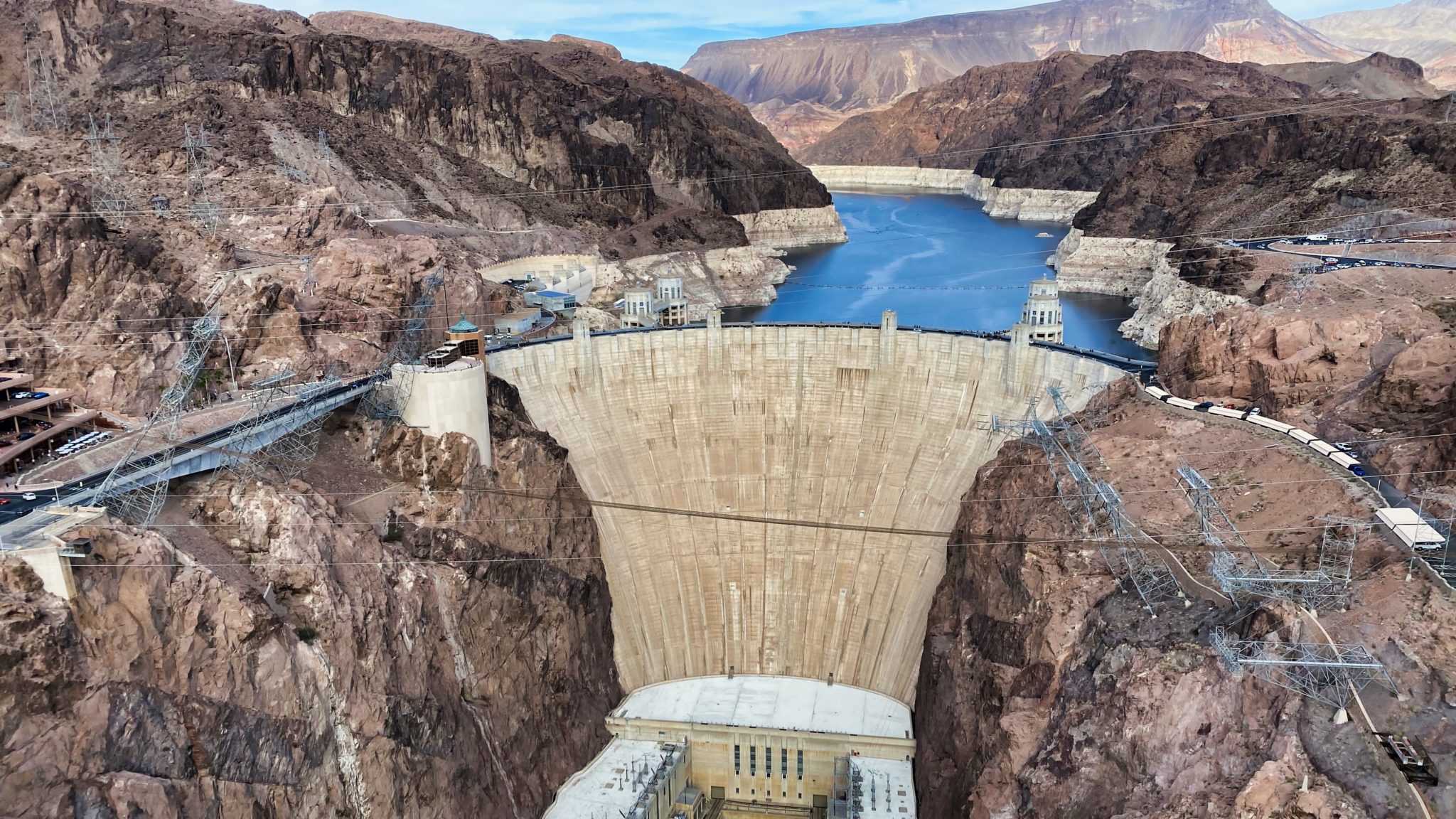 As the United States developed the Southwest, the Colorado River was seen as a potential source of irrigation water. An initial attempt at diverting the river for irrigation purposes occurred in the late 1890s, when land speculator William Beatty built the Alamo Canal just north of the Mexican border; the canal dipped into Mexico before running to a desolate area Beatty named the Imperial Valley. Though water from the Imperial Canal allowed for the widespread settlement of the valley, the canal proved expensive to operate. After a catastrophic breach that caused the Colorado River to fill the Salton Sea, the Southern Pacific Railroad spent $3 million in 1906–07 to stabilize the waterway, an amount it hoped in vain would be reimbursed by the federal government. Even after the waterway was stabilized, it proved unsatisfactory because of constant disputes with landowners on the Mexican side of the border.

As the technology of electric power transmission improved, the Lower Colorado was considered for its hydroelectric-power potential. In 1902, the Edison Electric Company of Los Angeles surveyed the river in the hope of building a 40-foot (12 m) rock dam which could generate 10,000 horsepower (7,500 kW). However, at the time, the limit of transmission of electric power was 80 miles (130 km), and there were few customers (mostly mines) within that limit. Edison allowed land options it held on the river to lapse—including an option for what became the site of Hoover Dam.

In the following years, the Bureau of Reclamation (BOR), known as the Reclamation Service at the time, also considered the Lower Colorado as the site for a dam. Service chief Arthur Powell Davis proposed using dynamite to collapse the walls of Boulder Canyon, 20 miles (32 km) north of the eventual dam site, into the river. The river would carry off the smaller pieces of debris, and a dam would be built incorporating the remaining rubble. In 1922, after considering it for several years, the Reclamation Service finally rejected the proposal, citing doubts about the unproven technique and questions as to whether it would, in fact, save money.

In 1922, the Reclamation Service presented a report calling for the development of a dam on the Colorado River for flood control and electric power generation. The report was principally authored by Davis, and was called the Fall-Davis report after Interior Secretary Albert Fall. The Fall-Davis report cited use of the Colorado River as a federal concern because the river’s basin covered several states, and the river eventually entered Mexico. Though the Fall-Davis report called for a dam “at or near Boulder Canyon”, the Reclamation Service (which was renamed the Bureau of Reclamation the following year) found that canyon unsuitable. One potential site at Boulder Canyon was bisected by a geologic fault; two others were so narrow there was no space for a construction camp at the bottom of the canyon, or for a spillway. The Service investigated Black Canyon and found it ideal; a railway could be laid from the railhead in Las Vegas to the top of the dam site. Despite the site change, the dam project was referred to as the “Boulder Canyon Project”.

With little guidance on water allocation from the Supreme Court, proponents of the dam feared endless litigation. Delph Carpenter, a Colorado attorney, proposed that the seven states which fell within the river’s basin (California, Nevada, Arizona, Utah, New Mexico, Colorado and Wyoming) form an interstate compact, with the approval of Congress. Such compacts were authorized by Article I of the United States Constitution but had never been concluded among more than two states. In 1922, representatives of seven states met with then-Secretary of Commerce Herbert Hoover. Initial talks produced no result, but when the Supreme Court handed down the Wyoming v. Colorado decision undermining the claims of the upstream states, they became anxious to reach an agreement. The resulting Colorado River Compact was signed on November 24, 1922. 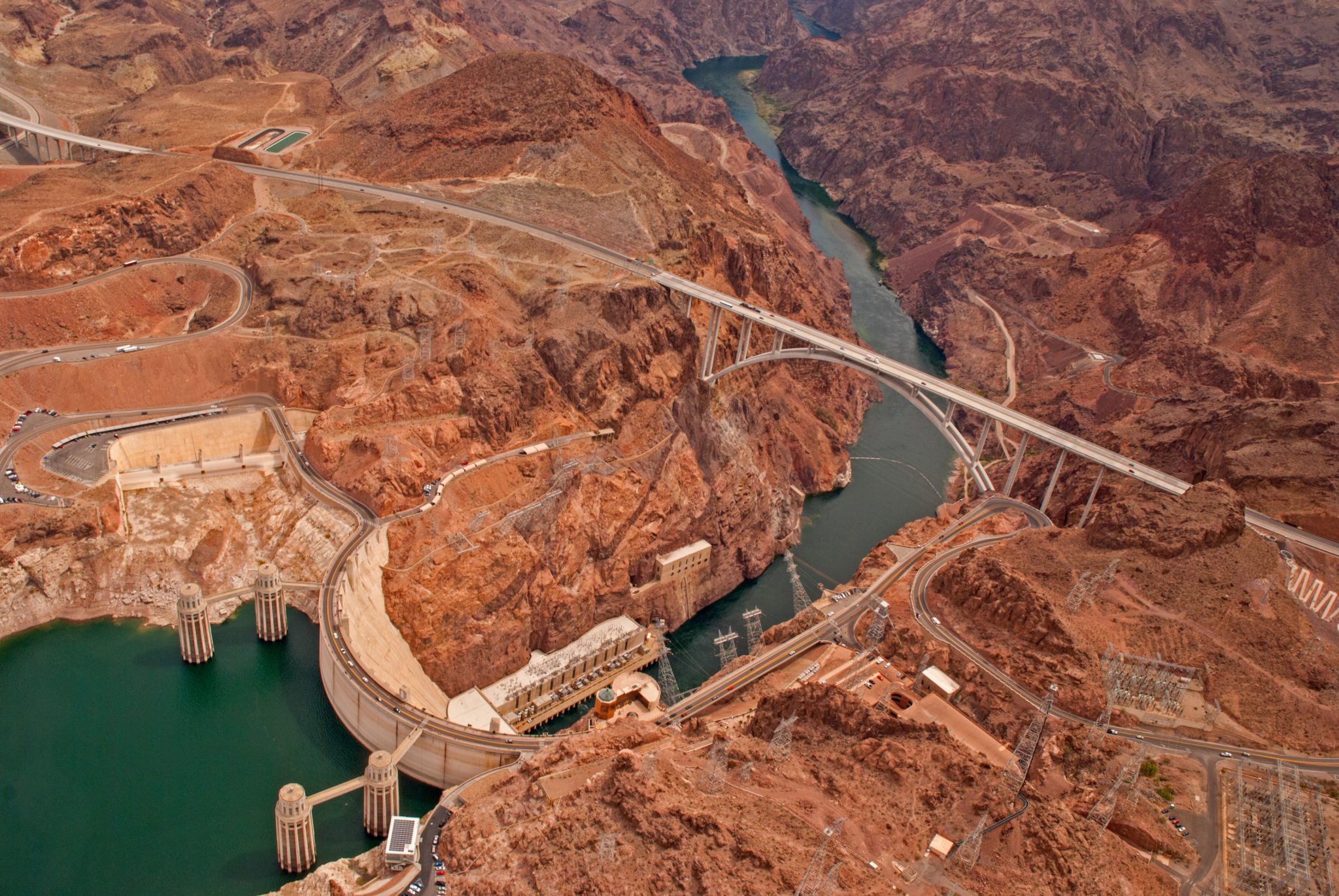 Legislation to authorize the dam was introduced repeatedly by two California Republicans, Representative Phil Swing and Senator Hiram Johnson, but representatives from other parts of the country considered the project as hugely expensive and one that would mostly benefit California. The 1927 Mississippi flood made Midwestern and Southern congressmen and senators more sympathetic toward the dam project. On March 12, 1928, the failure of the St. Francis Dam, constructed by the city of Los Angeles, caused a disastrous flood that killed up to 600 people. As that dam was a curved-gravity type, similar in design to the arch-gravity as was proposed for the Black Canyon dam, opponents claimed that the Black Canyon dam’s safety could not be guaranteed. Congress authorized a board of engineers to review plans for the proposed dam. The Colorado River Board found the project feasible, but warned that should the dam fail, every downstream Colorado River community would be destroyed, and that the river might change course and empty into the Salton Sea. The Board cautioned: “To avoid such possibilities, the proposed dam should be constructed on conservative if not ultra-conservative lines.”

On December 21, 1928, President Coolidge signed the bill authorizing the dam. The Boulder Canyon Project Act[23] appropriated $165 million for the project along with the downstream Imperial Dam and All-American Canal, a replacement for Beatty’s canal entirely on the U.S. side of the border. It also permitted the compact to go into effect when at least six of the seven states approved it. This occurred on March 6, 1929, with Utah’s ratification; Arizona did not approve it until 1944. 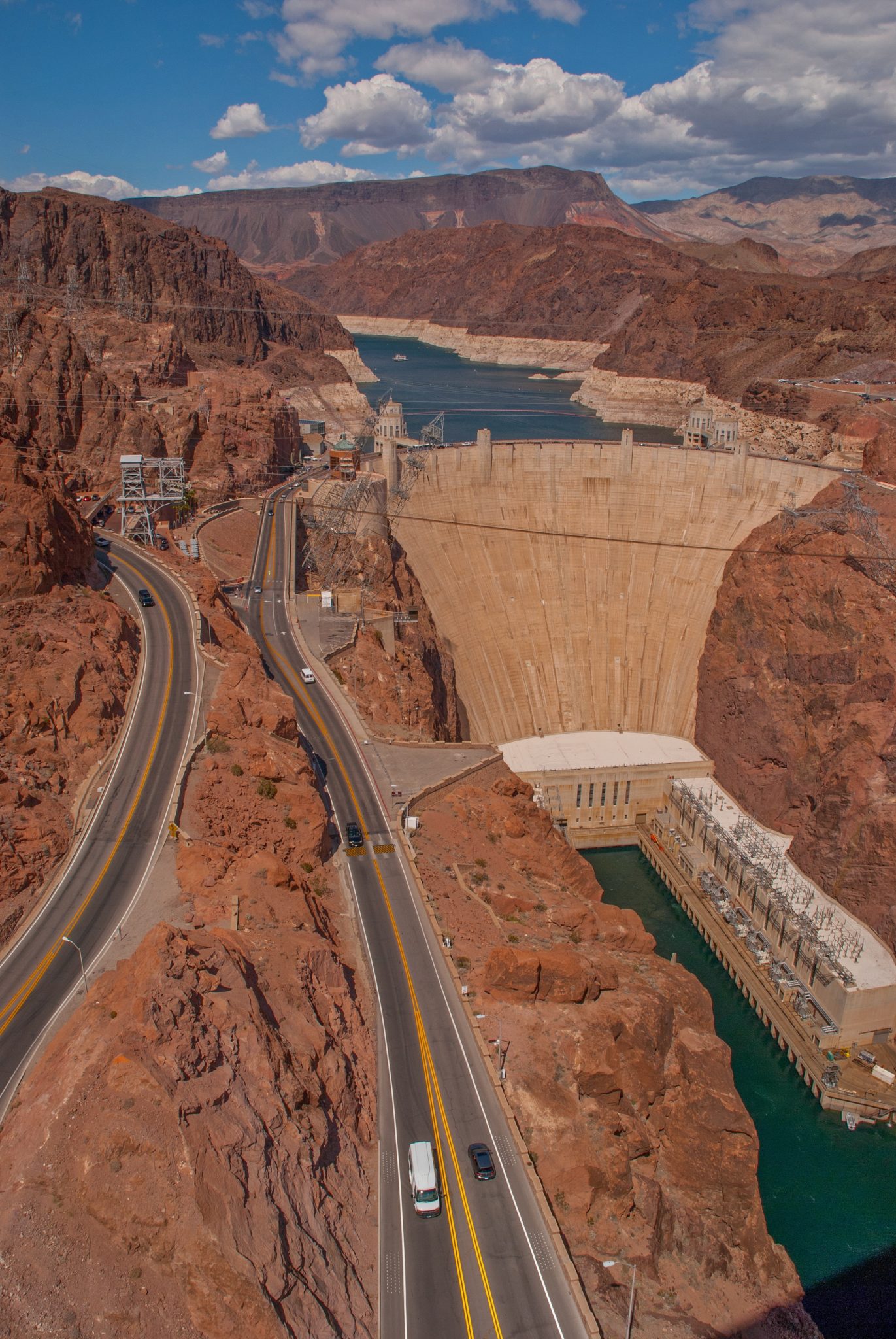 Soon after the dam was authorized, increasing numbers of unemployed people converged on southern Nevada. Las Vegas, then a small city of some 5,000, saw between 10,000 and 20,000 unemployed descend on it. A government camp was established for surveyors and other personnel near the dam site; this soon became surrounded by a squatters’ camp. Known as McKeeversville, the camp was home to men hoping for work on the project, together with their families. Another camp, on the flats along the Colorado River, was officially called Williamsville, but was known to its inhabitants as “Ragtown”. When construction began, Six Companies hired large numbers of workers, with more than 3,000 on the payroll by 1932 and with employment peaking at 5,251 in July 1934. “Mongolian” (Chinese) labor was prevented by the construction contract, while the number of black people employed by Six Companies never exceeded thirty, mostly lowest-pay-scale laborers in a segregated crew, who were issued separate water buckets.

As part of the contract, Six Companies, Inc. was to build Boulder City to house the workers. The original timetable called for Boulder City to be built before the dam project began, but President Hoover ordered work on the dam to begin in March 1931 rather than in October. The company built bunkhouses, attached to the canyon wall, to house 480 single men at what became known as River Camp. Workers with families were left to provide their own accommodations until Boulder City could be completed, and many lived in Ragtown. The site of Hoover Dam endures extremely hot weather, and the summer of 1931 was especially torrid, with the daytime high averaging 119.9 °F (48.8 °C). Sixteen workers and other riverbank residents died of heat prostration between June 25 and July 26, 1931.

The Industrial Workers of the World (IWW or “Wobblies”), though much-reduced from their heyday as militant labor organizers in the early years of the century, hoped to unionize the Six Companies workers by capitalizing on their discontent. They sent eleven organizers, several of whom were arrested by Las Vegas police. On August 7, 1931, the company cut wages for all tunnel workers. Although the workers sent the organizers away, not wanting to be associated with the “Wobblies”, they formed a committee to represent them with the company. The committee drew up a list of demands that evening and presented them to Crowe the following morning. He was noncommittal. The workers hoped that Crowe, the general superintendent of the job, would be sympathetic; instead, he gave a scathing interview to a newspaper, describing the workers as “malcontents”.

On the morning of the 9th, Crowe met with the committee and told them that management refused their demands, was stopping all work, and was laying off the entire work force, except for a few office workers and carpenters. The workers were given until 5 p.m. to vacate the premises. Concerned that a violent confrontation was imminent, most workers took their paychecks and left for Las Vegas to await developments. Two days later, the remainder were talked into leaving by law enforcement. On August 13, the company began hiring workers again, and two days later, the strike was called off. While the workers received none of their demands, the company guaranteed there would be no further reductions in wages. Living conditions began to improve as the first residents moved into Boulder City in late 1931.

A second labor action took place in July 1935, as construction on the dam wound down. When a Six Companies manager altered working times to force workers to take lunch on their own time, workers responded with a strike. Emboldened by Crowe’s reversal of the lunch decree, workers raised their demands to include a $1-per-day raise. The company agreed to ask the Federal government to supplement the pay, but no money was forthcoming from Washington. The strike ended.

Hoover Dam was recognized as a National Civil Engineering Landmark in 1984. It was listed on the National Register of Historic Places in 1981, and was designated a National Historic Landmarkin 1985, cited for its engineering innovations. 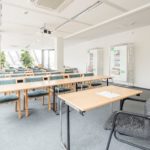 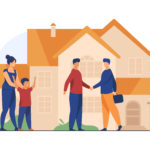 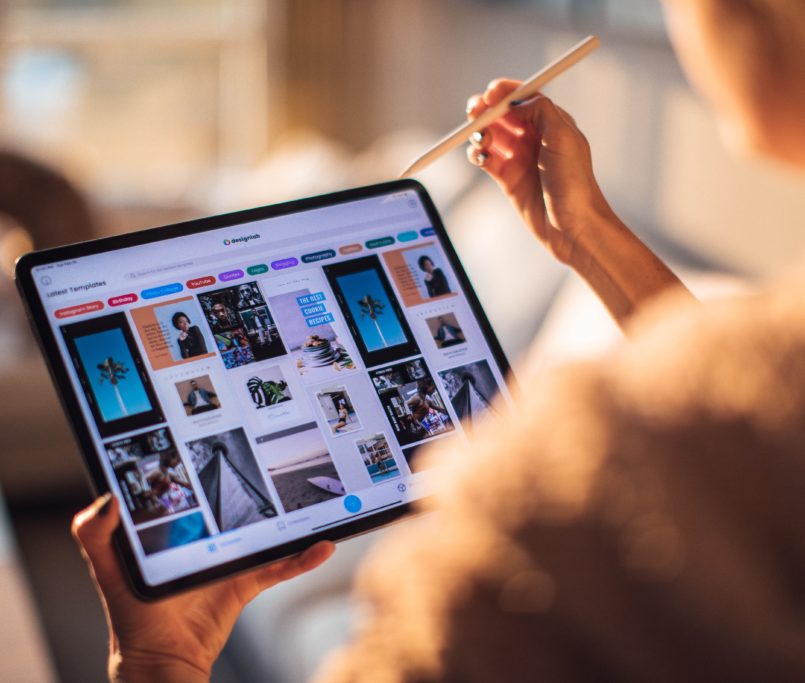 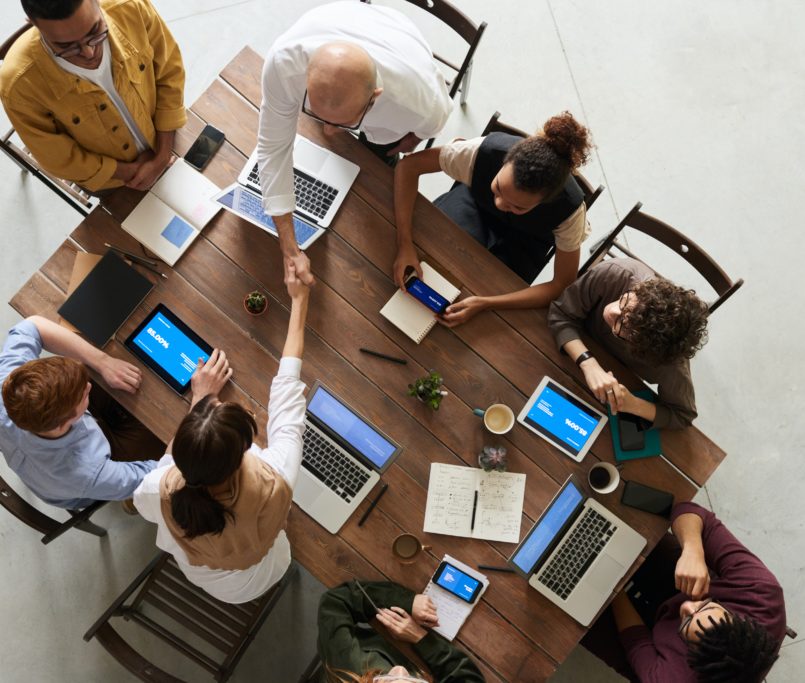